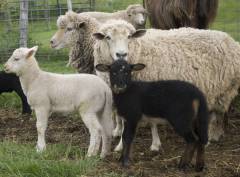 You know there are different breeds of dogs, horses and cows, and in that sheep are no different.  And just like dog breeders, sheep breeders will insist that their favored breed is hands-down the best breed of sheep to ever walk the face of this planet!

And also like dog breeds, a purebred is important if you plan to show the dog, but if your only concern is to have a healthy dog then a mutt is just as good.  In fact so many dog purebreds are line-bred and in-bred to keep the bloodlines pure, that a mutt is often a healthier alternative.  I believe the same is true with sheep.

"The domestic culture of the sheep, for the sake of its wool, has long occupied the attention of civilized nations, and has produced the highly-valued merino species, from which our best wool is now procured." 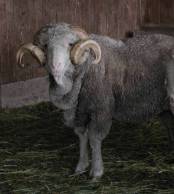 The best known of the historic breeds, merino sheep were developed in Spain, probably descendants of the Ancient Romans’ sheep.  In the 700s (that's correct, 700s not 1700s), the merino became greatly prized and from then until the late 1700s it was illegal to take merinos out of Spain.

During the American Revolution, David Humphrey served as a field secretary under General Washington.  After the War, in 1796,  he was appointed minister to Spain and while there he studied the merino sheep.  In 1802 he brought merinos to Connecticut, and in 1810 developed the state’s first wool company.

Merinos became a very common breed in America; almost every farm had some, and pioneers brought merinos with them west.  Thomas Jefferson had a flock of merinos at Monticello, and Civil War uniforms were woven from merino wool. 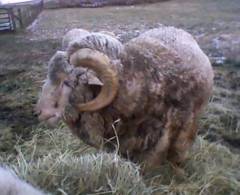 Merinos naturally have some wrinkles, especially around the neck.  In the late 19th century breeders started selecting merinos for their wrinkles, and photographs of super wrinkley merinos typically date from the 1880s and 1890s.  The number of wrinkles increased the surface area of the skin – the more skin an animal had the more wool it could produce, and the more profitable it became.  But more wrinkles also mean more difficulty at shearing time, especially after electric shears became accepted in the 1890s and at the turn of the century.

Merinos have superior wool, and because of that most breeds - even new breeds - have merino in their bloodlines.  But the wrinkles mean extra trouble at shearing time, which just isn't worth it to a meat breeder who isn't concerned with wool quality.  In addition, merinos grow slowly and typically have single births, both characteristics that make them unprofitable for meat farmers.  You'll find very few merinos in the U.S. today, and most are on historic farms or at living history museums.

I've always had 100% merino rams.  My first few were white rams, and my current ram is a black ram.  (I only keep one ram at a time).  Most of my current sheep are merino or mostly merino, and because of my merino rams all of the lambs born on my farm are at least 50% merino. 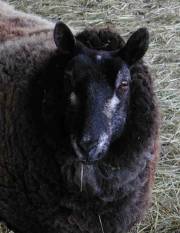 The Cheviot Sheep (think of the truck, it's pronounced Chevy-it) originated from the Cheviot Hills in Scotland.  The breed was first documented in 1372.  According to legend, they were created by the gods and walked out of the sea.  Most likely, they swam ashore from a shipwreck carrying live sheep as a source of fresh meat along the journey.

For centuries, the Cheviot sheep lived in the hills with very little help from humans and developed into an extremely hardy sheep.  Cheviot wool has always been held in very high esteem.  It is a very durable wool and is best known for its use in Scotch Tweed.

In 1834 the children of Thomas Laider, a shepherd in the Cheviot Hills, immigrated to America.  In 1842 Laider sent each of his four children three Cheviot sheep, sending rams to his sons and ewes to his daughters to ensure that his children worked together in the New World.  From those twelve sheep all the Cheviot sheep in New York had their origin.

While most Cheviots are white, my cheviots have been intentionally bred for their color, a recessive gene, by Nanette Mosher.  Three of my first five sheep were 100% Cheviot (Angel and her daughters Harriett and Flower).  I no longer have any 100% Cheviots, but the number of black lambs in my flock is a testiment to the amount of Cheviot blood that remains in my flock.