How My Wool is Spun 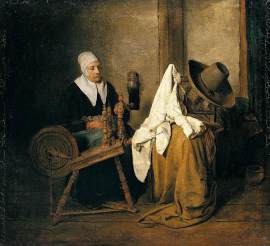 Interior with an Old Woman at a Spinning Wheel (1667), by Esaias Boursse

I do some hand spinning, but my handspun is far too precious to sell!  The wool yarn I sell has been spun at Blackberry Ridge Woolen Mill, a small family-run mill in Wisconsin that specializes in spinning small quantities of wool.

People have spun wool on handspindles for thousands of years and with spinning wheels for a few hundred years.  The exact date for the invention of the spinning wheel is unknown, but the earliest clear illustrations of spinning wheels are from the 1200s.

Before textile industrialization, a family could easily spin enough wool for their own use.  But the beginning of weaving industrialization made it impossible for spinners to keep up with the needs of a textile mill.  In the 1760s James Hargreaves invented the “spinning jenny,” capable of using eight spindles to spin eight threads simultaneously.  In 1770 he patented the idea for a sixteen spindle spinning jenny, and later models could spin up to 120 spindles. 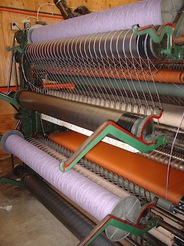 The main difference between antique spinning mills and modern mills is that newer machines are larger, allowing them to process more wool at a time.  They also have safety devices that weren’t deemed necessary in the days when labor was cheap and injured or killed workers were simply replaced.

The machines used at Blackberry Ridge were purchased from a mill in Worchester, Massachusetts.  The mill was still in operation when they inspected the machinery in 1987.  The oldest piece of machinery used at Blackberry Ridge is the card, made in 1904 and 1905.  The newest piece is the spinning frame, made in 1954.  The other pieces that round out the process were made in the 1930s and 1940s.

When representing a time period before the 1750s handspun yarn is more historically accurate, although hand spun from an excellent spinner looks the same as mill spun yarn, so whether you knit with hand spun or mill spun yarn will be a secret known only to you.

Milled yarn is authentic for any time period after the 1760s.