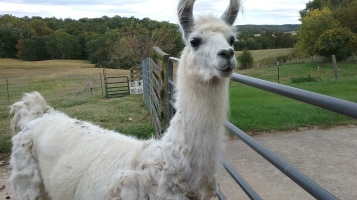 Kiki, my current llama, on duty since October 2020.

Early one morning soon after we had moved to Stockton, I found a dead sheep.  I won’t gross you out with details, but from the remains I could tell the sheep had been attacked by a dog or a coyote.  Two weeks later I found another dead sheep.  I talked to a local coyote hunter who said our local pack traveled in a large area, but returned about every other week.  Unless I did something, he said I could expect to find a dead sheep every two weeks.

A 19th century farmer with the same problem would have killed any coyote, dog or wolf bothering his livestock using traps, poison, or a good old-fashioned musket.

Instead, I solved the problem with a llama. 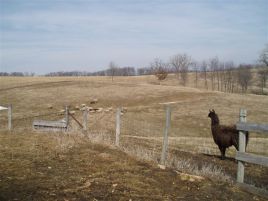 Simon watching over his flock.

A guard llama keeps a look-out, alerting the sheep when he senses danger.  About the size of a small horse, the coyotes think the llama is the biggest sheep they’ve ever seen!  My predator-friendly method leaves the coyotes unharmed and free to roam the rest of the property, but they know to stay away from the sheep.

Moses, my first llama, was on guard from October 2003 until he died in the line of duty in January 2006.  Moses was one of the sheep, constantly with the herd.  When he sensed danger he would round up the sheep and drive them into the barn, like a cowboy!  Next Simon was on guard, serving for nearly ten years from October 2006 until March 2016.  Simon had a different guarding style, keeping his distance from the sheep but always vigilantly watching.  The exception was at lambing time, when Simon would let the lambs climb all over him like a jungle gym.  He was excellent, and had so much street cred that for a few years after Simon died the coyotes still left our farm alone! 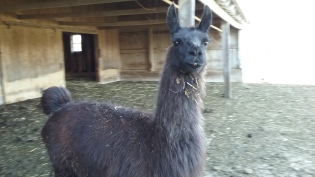 But in the spring of 2018 I started loosing sheep again.  It may have been coyotes again, but I also found some very large, solitary, canine tracks that made me think it was very likely a wolf.  Time for another llama, so Rockey joined our farm in July of 2018 and was on guard until September 2020.

All llamas can guard, but some llamas are superior guards . . . and others are just, meh.  I've been lucky, Moses and Simon were beyond superior guards and I never had a single predator attack while they were on duty - a 13 year stretch!  But my third llama, Rockey, did not rank quite as highly.  I had some sheep killed while Rockey was on guard.  Rockey was a meh guard, and I was used to perfection! 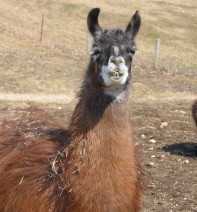 So I decided that this time I would buy my llama from a llama expert.  I choose Namaste Llama Farm in Alburnett, Iowa, and my newest llama, Kiki, has been on guard since October 2020.  She is a beautiful whtie llama - all of my llamas up to this point have been brown!  Her guarding style is very similar to Simon's, vigilantly watching from a distance.  She neurotically walks the fence line, so much so that she quicly wore a dead spot on the pasture grass from all of her pacing!  She watches the sheep in the pasture but is also vigilantly looking outside the pasture for any approaching danger.  So far she is working out well and we are very pleased with her!

Llamas have been well-known fiber producing animals in South America for many centuries, and when I shear the sheep the llama gets sheared as well.  However, llama fiber is a recent “discovery” among North Americans, and a llama would not have been part of a typical 18th, 19th or early 20th century Midwestern American farmer’s homestead.  The llama fiber is kept separate from the sheep wool and is not added to any of my yarns, since llama fiber would not be a historically correct part of an 18th, 19th or early 20th century woman’s knitting basket. 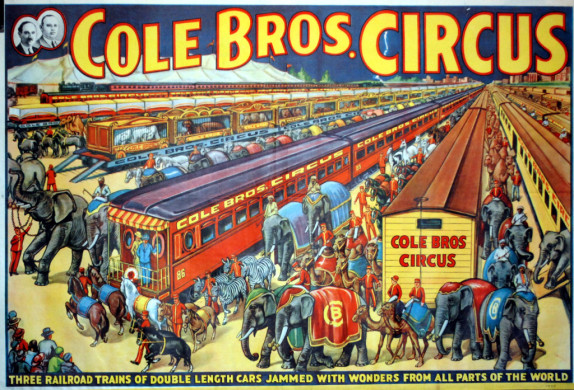 In the 18th, 19th and early 20th century, llamas were so exotic that the best place for an ordinary American to see a llama was at the circus.  In this poster from the 19th century, the Cole Brothers Circus is promoting the strange creatures, "Wonders from All Parts of the World," that you will see at their circus.  Walking next to train car #86 you see four zebras, followed by two elephants, a few horses, and then - gasp! - four white llamas!  This poster is part of the Circus World Museum's poster collection.  The Cole Brothers Circus was founded in 1884.